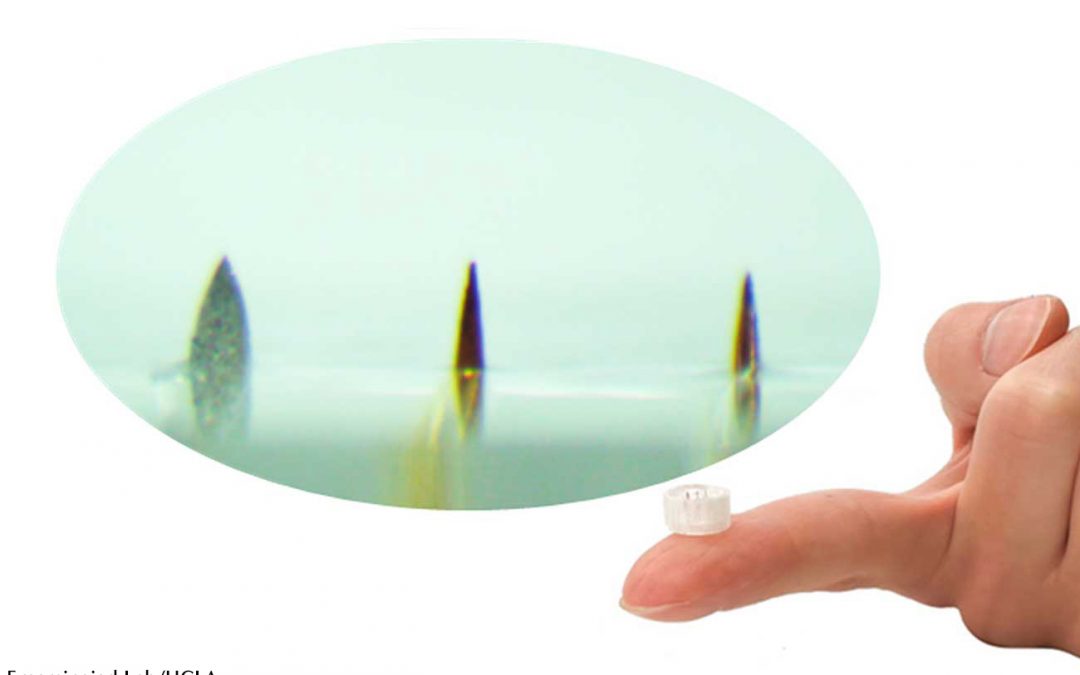 The sensor uses microneedles that are made by cutting down clinical-grade acupuncture needles.

For some of the powerful drugs used to fight infection and cancer, there’s only a small difference between a healing dose and a dose that’s large enough to cause dangerous side effects. But predicting that margin is a persistent challenge because different people react differently to medications — even to the same dose.

Currently, doctors can calibrate the amount of medication they administer in part by drawing blood to test the amount of medicine in a patient’s body. But results from those tests often take a day to process and only measure dosage at one or two moments in time, so they don’t help much when determining how to adjust dosage amounts in real time.

Now, a UCLA-led research team has developed a wearable patch that uses inexpensive microneedles to analyze the fluid between cells less than a millimeter underneath the skin and continuously record concentrations of medicine in the body. The technology could be a step toward improving doctors’ ability to administer precise medication doses.

In a study published in Science Advances, the investigators tested the system in rats that had been treated with antibiotics. Using data taken by the device within about 15 minutes after the medication was administered, the researchers reliably forecast how much of that drug would be effectively delivered to the animal’s system in total.

“This biosensing microneedle technology advances many different aspects of personalized medicine,” said Sam Emaminejad, the paper’s senior and corresponding author, a member of the California NanoSystems Institute at UCLA. “It may allow us to improve treatments by optimizing the drug dosage for each individual, and it’s inexpensive, so everyone could benefit from this solution. Additionally, it may allow us to inform care by measuring not only drug molecules but also naturally occurring molecules in the body that are relevant to health, offering a new format for wearable health monitoring.”

Emaminejad is also an associate professor of electrical and computer engineering at the UCLA Samueli School of Engineering and the director of the Interconnected and Integrated Bioelectronics Lab.

The ability to precisely measure drug dosage could also expand physicians’ options for treating their patients. Today, doctors shy away from prescribing some drugs that can be highly effective at the proper dose but toxic or even fatal at a dose that’s too high. Enabling them to more safely administer those medicines may also help mitigate dangerous bacteria’s increasing resistance to antibiotics.

“The emerging microbial antibiotic resistance crisis is in part rooted in ineffective use of antibiotics, including poor choices of drugs,” said Stanford University pediatric pulmonologist Carlos Milla, a co-author of the study. “Oftentimes this is due to the difficulties of managing the most effective drugs to avoid serious toxicities. This sensor certainly opens up the chance for great precision and confidence using the most effective medicines.”

The patch, about a quarter-inch in diameter, detects drugs using engineered strands of DNA called aptamers. When an aptamer comes in contact with a specific target molecule, it changes shape. In the device, one end of the aptamers is anchored to gold nanoparticles deposited on the microneedle. The other end of the aptamers is attached to special molecules that produce measurable signals when the aptamers change shape.

The exposed part of the microneedles, which are made by cutting down clinical-grade acupuncture needles, is only about half a millimeter long.

The researchers evaluated the device in rats using three different dosages of the antibiotic tobramycin. They found that the patch’s measurements of drug concentrations correlated with those produced by conventional blood tests. The patch’s measurement of peak drug concentration in the body — which occurs in the first 12 to 20 minutes after a dose is administered — could be used to predict how much of the medication is effectively delivered to the body over the course of an hour or more.

“These experiments not only showed that our sensor readings are reliable, but also validated our models for correlating minimally invasive measurements to the concentration of drug circulating in the blood,” said lead author Shuyu Lin, a former member of Emaminejad’s lab who recently earned his doctorate from UCLA.

The authors estimate that materials to produce the patch would cost less than $2 per unit, suggesting that it could be manufactured cost-effectively on a large scale. Future studies will focus on optimizing the patch and further analyzing its safety, before it moves to clinical trials. That research will be funded in part by a grant from CNSI’s Noble Family Innovation Fund.