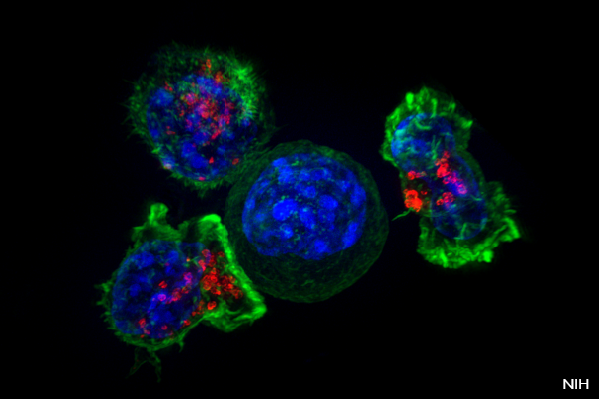 In May 2022, Alyssa, 13 from Leicester, became the first reported patient in the world to receive base-edited T-cells at Great Ormond Street Hospital for Children (GOSH), in collaboration with the UCL Great Ormond Street Institute of Child Health (UCL GOS ICH), to treat her “incurable” T cell leukaemia.

In 2021, Alyssa was diagnosed with T-cell acute lymphoblastic leukaemia (T-ALL) and received all current conventional therapies for her cancer, including chemotherapy and a bone marrow transplant. Unfortunately her disease came back and there were no further treatment options available as part of routine care.

Alyssa was the first patient to be enrolled onto a new clinical trial and in May she was admitted to the Bone Marrow Transplant (BMT) Unit at GOSH, to receive genetically modified CAR T-cells that originally came from a healthy donor. These cells had been edited using new base-editing technology to allow them to hunt down and kill the cancerous T-cells without attacking each other.

Just 28 days later, she was in remission and went on the receive a second bone marrow transplant to restore her immune system. Now, six-months post-BMT, she is doing well at home recovering with her family and continues her post-BMT follow-up at GOSH.

It has been more difficult to treat T-cell leukaemia with traditional CAR T-cell therapy because T-cells designed to recognize and attack cancerous T-cells also end up killing each other during the manufacturing process before they can be given as a treatment.

Teams at GOSH and the UCL GOS ICH have therefore been working, using a new genome editing technique called base-editing, to create a new type of CAR T-cell therapy that is able to attack cancerous T-cells. Base editing works by chemically converting single letters of the DNA code (single nucleotide bases) to change the T-cells.

The team used the technique to make multiple changes to healthy donor T-cells, arranged by the Anthony Nolan registry, that have meant cells do not need to be collected from the patient:

Paves the way for future treatments

The result is edited CAR T-cells that can be given to the patient so that they rapidly find and destroy T-cells in the body, including leukemic T-cells. If successful, the patient then receives a bone marrow transplant to restore their depleted immune system.

This is a great demonstration of how, with expert teams and infrastructure, we can link cutting edge technologies in the lab with real results in the hospital for patients. It’s our most sophisticated cell engineering so far and paves the way for other new treatments and ultimately better futures for sick children.  We have a unique and special environment here at GOSH and the UCL GOS ICH that allows us to rapidly scale up new technologies and we’re looking forward to continuing our research and bringing it to the patients who need it most.