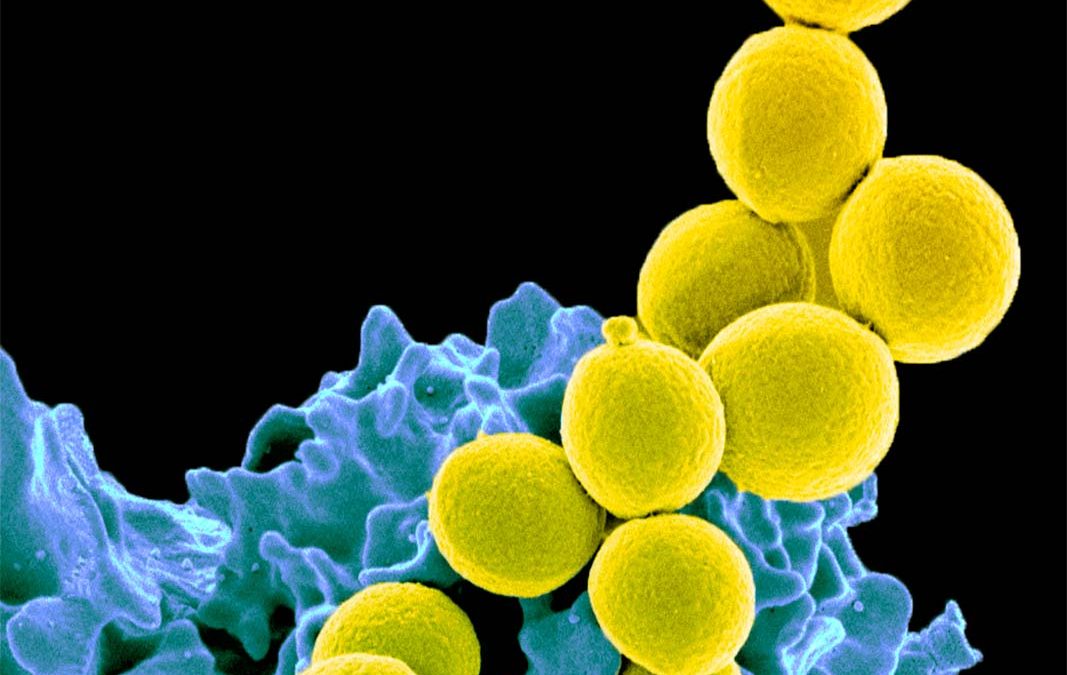 A promising approach to control Staphylococcus aureus bacterial colonization in people—using a probiotic instead of antibiotics—was safe and highly effective in a Phase 2 clinical trial. The new study, reported in The Lancet Microbe, found that the probiotic Bacillus subtilis markedly reduced S. aureus colonization in trial participants without harming the gut microbiota, which includes bacteria that can benefit people. The research was conducted by researchers at the National Institutes of Health led by Michael Otto, Ph.D., an NIH senior investigator at the National Institute of Allergy and Infectious Diseases (NIAID).

Methicillin-resistant S. aureus, or MRSA, is familiar to many people as a cause of serious disease. Less well known is that S. aureus often lives in the nose, on the body and in the gut without causing any harm. However, if the skin barrier is broken, or the immune system compromised, these colonizing bacteria can cause serious skin, bone, lung, and blood infections.

The prevention of S. aureus infections using approaches to “decolonize” the body has gained increased attention as the spread of antibiotic resistance limits treatment options. Some decolonization strategies are controversial because they also require large amounts of antibiotics, raising concerns about damage to the microbiota and the development of antibiotic resistance.  So far, it appears that only nasal S. aureus colonization can be targeted with topical antibiotics without doing too much harm, but bacteria quickly can recolonize in the nose from the gut.

Probiotics, digestive supplements containing live microorganisms may be a way to complement or replace antibiotics. Probiotic Bacillus is especially promising because it is administered orally as spores that can survive passage through the stomach and then temporarily grow in the intestine.

In the clinical trial, conducted in Thailand, the research team tested whether this approach works in people. They enrolled 115 healthy participants, all of whom were colonized naturally with S. aureus. A group of 55 people received B. subtilis probiotic once daily for four weeks; a control group of 60 people received a placebo. After four weeks, researchers evaluated the participants’ S. aureus levels in the gut and nose. They found no changes in the control group, but in the probiotic group they observed a 96.8% S. aureus reduction in the stool and a 65.4% reduction in the nose.

“The probiotic we use does not ‘kill’ S. aureus, but it specifically and strongly diminishes its capacity to colonize,” Dr. Otto said. “We think we can target the ‘bad’ S. aureus while leaving the composition of the microbiota intact.”

The researchers also found that levels of S. aureus bacteria in the gut far exceeded S. aureus in the nose, which for decades has been the focus of staph infection prevention research. This finding adds to the potential importance of S. aureus reduction in the gut.

“Intestinal S. aureus colonization has been evident for decades, but mostly neglected by researchers because it was not a viable target for antibiotics,” Dr. Otto said. “Our results suggest a way to safely and effectively reduce the total number of colonizing S. aureus and also call for a categorical rethinking of what we learned in textbooks about S. aureus colonization of the human body.”

The researchers plan to continue their work by testing the probiotic in a larger and longer trial. They note that their approach probably does not work as quickly as antibiotics, but can be used for long periods because the probiotic as used in the clinical trial does not cause harm. Study collaborators in Thailand are from Rajamangala University of Technology Srivijaya, and Prince of Songkla University.

Read more at the National Institute for Health.