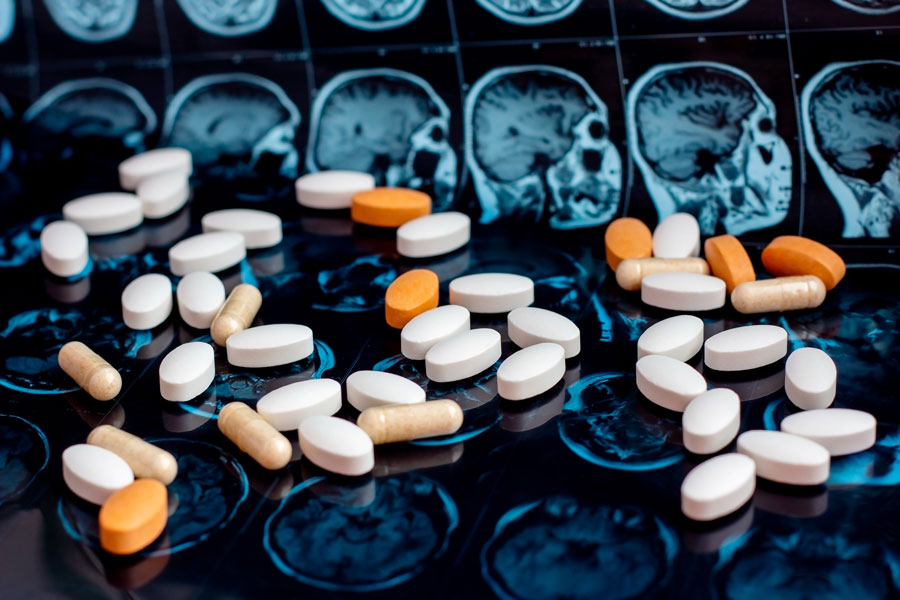 Rather than attempting to treat the multiple pathologies of Alzheimer’s disease individually, as is the current practice, researchers in the Buck Institute’s Andersen lab have designed a smart cell-based delivery system (SmaCD) to treat them all at once. The National Institutes of Health considers the effort as high risk/high reward with the potential to change how we treat multiple diseases. It has awarded the lab a $2.4 million Transformative Research Award to move the science forward, one of just nine awards made nationally.

“Alzheimer’s is a complex disease with pathologies coming from at least three directions,” says Buck professor Julie Andersen, PhD. “Available drugs only target single pathologies, likely contributing to the dismal results we see in clinical trials for Alzheimer’s. The beauty of our system is that it delivers a combination therapy that addresses all of the pathologies in a targeted manner that also reduces the risk of side effects.”

The SmaCD, designed by research scientist Chaska Walton, PhD, has a space age quality to it. Walton aims to turn immune cells into mobile biological drug factories that can “decide” when to release drugs at the site of pathology. Then, once cleared, they can move to the next site of pathology.

The SmaCD works with bio-synthesizable drugs, drugs based on amino acids that can be coded to churn out more of themselves as needed.  In this cas,e the combination therapy is based on two monoclonal antibodies: Aduhelm™(aducanumab-avwa), which is FDA approved to clear the amyloid plaques that are a hallmark of Alzheimer’s, and zagotenemab, which failed a Phase II clinical trial aimed at clearing tau tangles, another feature of Alzheimer’s.

Walton’s project uses SmaCD to target the most afflicted regions of the brain with a combination therapy based on Aduhelm and zagotenemab. Microglia act as the first and main form of active immune defense in the central nervous system. The goal is to activate them to clear the amyloid plaques and disease-spreading tau, respectively. The drugs will be accompanied by an immuno-modulator to enhance the microglia’s ability to “eat” damaged cells, while suppressing inflammation at the same time.

Walton’s Alzheimer’s project involves human and mouse cell cultures and in vivo studies in mice with mid- and late-stage disease. Highlighting SmaCD’s flexibility, Walton notes that the original project design is evolving as testing around Alzheimer’s antibodies is updated. He says the project could involve additional therapeutics that target other contributing factors to Alzheimer’s pathology such as variants in ApoE alleles and lipid transport.

At a basic level, Walton’s SmaCD is somewhat similar to CAR-T therapies which are providing breakthrough treatments for some forms of cancer. In those cases, specific immune cells are genetically altered and infused into patients to act as a “living drug” which recognizes cancer cells and destroys them.

There is, however, a critical difference. “CAR-T’s are designed to kill and we don’t want to kill. We want to heal,” says Walton. “This platform is designed to act as a mini doctor that could go to targeted locations and deliver drugs in response to the environment and in different sequences as provoked by the pathology.”

“The path to using genetically-engineered cells to cure cancer was not easy,” says Walton. “However CAR-T has become a highly-used therapeutic in cancer.  We think the timing is right. Alzheimer’s is now at the point at which cancer was prior to the development of CAR-T.”

The need for combination therapies that are safe

Given that amyloid beta and tau pathologies as well as brain inflammation and damage-related scarring (gliosis) are all harmful to the brain, Andersen thinks it’s unrealistic to expect that targeting a single pathological hallmark would improve cognition. She says the European Union–North American Clinical Trials in Alzheimer’s Disease Task Force (EU/US CTAD Task Force) is strongly encouraging the use of combination therapies.

“In addition to targeting each specific pathology, our system would treat Alzheimer’s at the site of the pathology at various stages of the disease. The entire body would not be exposed to the drugs, giving us a way of avoiding the side effects which have been the bane of many attempts to bring drugs to the clinic.”

Walton, who comes from Spain, adds, “In my country, we have a saying ‘you’re killing flies with cannonballs’ and that’s been the problem with drugs created to treat Alzheimer’s and other conditions. We harm the body while attempting to cure the disease.”

Implications for big pharma, biotech, and research on aging

Both Walton and Andersen think SmaCD could give biotech and pharmaceutical companies that had failed clinical trials for Alzheimer’s another shot at success. “Their drugs worked really well in mice, but when they put them into humans they had to reduce dosages to avoid side effects, which affected efficacy. Now there’s a way they would be able to deliver their drugs only to the region where it’s needed,” says Andersen.

SmaCD can be edited to target organs, cells, and or extracellular proteins to locally deliver any bio-synthesizable drug. That gives it wide applicability to treat numerous conditions, with aging among them.  “Aging is so complex and it impacts our tissues in such diverse ways, I think it’s highly unlikely that we’re going to find a miracle drug that is going to touch all the molecular pathways in the right directions with the right intensities,” says Walton. “Imagine if we could target different organs that had different age-related pathologies and deliver drugs in a smart way. That would be a game-changer.”