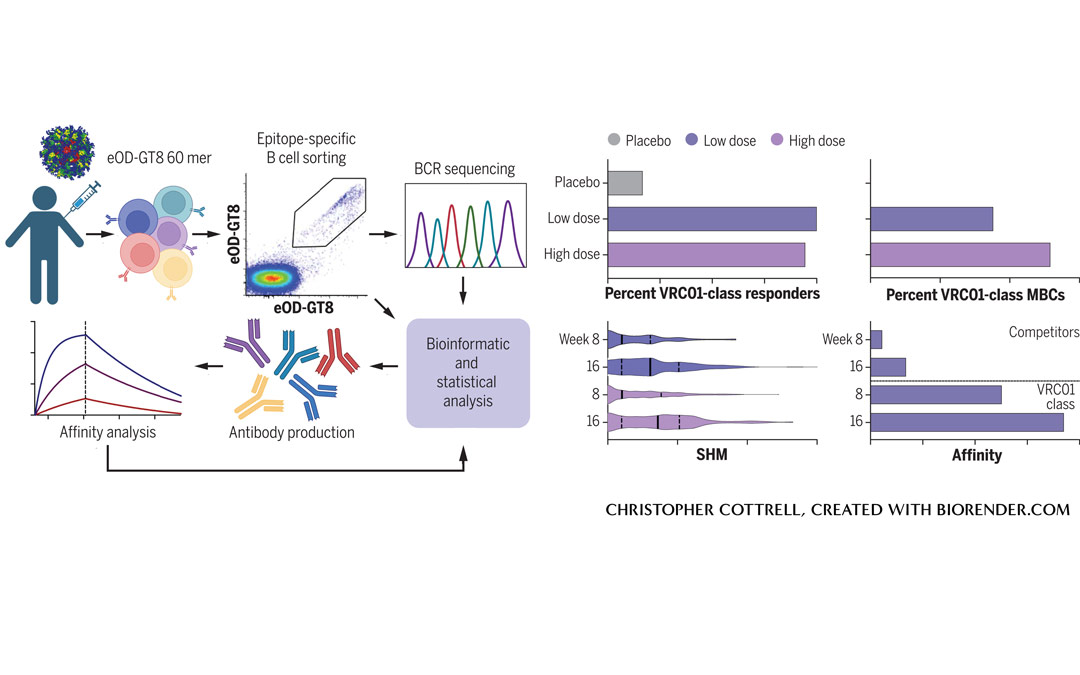 While scientists have struggled in the past to create an effective vaccine against HIV, a novel vaccine design strategy being pursued by researchers at Scripps Research, IAVI, Fred Hutchinson Cancer Center (Fred Hutch) and the National Institutes of Health, National Institute of Allergy and Infectious Diseases (NIAID) Vaccine Research Center (VRC) shows new promise, according to data from a first-in-human clinical trial.

In a paper published in Science on December 2, 2022, the scientists reveal critical new insights into their novel vaccine strategy, which involves a stepwise approach to producing antibodies capable of targeting a wide range of HIV variants.

“The data we are publishing in Science demonstrates for the first time that one can design a vaccine that elicits made-to-order antibodies in humans. We specified in advance certain molecular properties of the antibodies that we wanted to elicit, and the results of this trial show that our vaccine antigen consistently induced precisely those types of antibodies,” says co-senior author William Schief, PhD, a professor and immunologist at Scripps Research and executive director of vaccine design at IAVI’s Neutralizing Antibody Center, whose laboratory developed the vaccine antigen. “We believe this vaccine design strategy will be essential to make an HIV vaccine and may help the field create vaccines for other difficult pathogens.”

The Phase 1 trial, known as IAVI G001, tested the first stage in a multi-stage HIV vaccine regimen the researchers are developing. The trial results show that the vaccine had a favorable safety profile and induced the targeted response in 97% of people who were vaccinated. Importantly, the Science study also provides a detailed immunological analysis of the vaccine responses.

“HIV represents an area of dire unmet need across the world, which is what makes the findings from our Phase 1 clinical trial so encouraging,” says Mark Feinberg, MD, PhD, president and CEO of IAVI. “Through the close-knit collaboration of many different scientists, disciplines and institutions, we are that much closer to designing an effective vaccine that could help end the HIV pandemic.”

Broadly neutralizing antibodies (bnAbs) are a rare type of antibody that can fight and protect against many different variants of a virus—including HIV. This is why scientists have tried to develop an HIV vaccine that induces bnAbs, but thus far without success.

The researchers in the study are using a strategy known as ‘germline targeting’ to eventually produce bnAbs that can protect against HIV. The first step of germline targeting involves stimulating the rare immune cells—known as bnAb-precursor B cells—that can eventually evolve into the cells that produce the bnAbs needed to block the virus. To accomplish this first step, the researchers designed a customized molecule—known as an immunogen—that would “prime” the immune system and elicit responses from these rare bnAb-precursor cells.

The overarching goal of the IAVI G001 trial was to determine if the vaccine had an acceptable safety profile and could induce responses from these bnAb-precursor B cells.

“Through extensive safety and tolerability monitoring during the trial, we showed the vaccine had a favorable safety profile, while still inducing the necessary target cells,” says study author Dagna Laufer, MD, vice president and head of clinical development at IAVI. “This represents a large step forward in developing an HIV vaccine that is both safe and effective.”

To determine if the targeted bnAb-precursor B cells were induced, the researchers carried out a sophisticated analytical process.

“The workflow of multidimensional immunological analyses has taken clinical trial evaluation to the next level,” says co-senior author Adrian B. McDermott, PhD, former chief of the Vaccine Immunology Program at the NIAID VRC. “In evaluating these important immunological factors, we helped show why the vaccine antigen was able to induce the targeted response in 97% of vaccine recipients.”

IAVI G001 was sponsored by IAVI and took place at two sites: George Washington University (GWU) in Washington, D.C., and Fred Hutch in Seattle, enrolling 48 healthy adult volunteers. Participants received either a placebo or two doses of the vaccine antigen, eOD-GT8 60mer, along with an adjuvant developed by the pharmaceutical company GSK. Julie McElrath, MD, PhD, co-senior author, senior vice president and director of Fred Hutch’s Vaccine and Infectious Disease Division, and David Diemert, MD, professor of medicine at GWU School of Medicine and Health Sciences, were lead investigators at the trial sites.

The study also carefully examined the properties of the antibodies and B cells induced by the vaccine antigen, in what Schief likens to “looking under the car hood” to understand how the immune system operated in response to the vaccine. One analysis showed that the vaccine antigen first stimulated an average of 30 to 65 different bnAb precursors per person vaccinated, and then caused those cells to multiply. This helped explain why the vaccine induced the desired response in almost all participants.

One concern for this type of vaccine approach is the notion of “competitors”—in other words, the B cells induced by the vaccine antigen that are not bnAb precursors. The researchers extensively studied the “competitor” responses, and the results were very encouraging. Although the majority of the B cells triggered by vaccination were, in fact, “competitors”, these undesired B cells could not match the binding strength of the desired bnAb precursors and did not seem to impede maturation of the bnAb-precursor responses.

“These findings were very encouraging, as they indicated that immunogen design principles we used could be applied to many different epitopes, whether for HIV or even other pathogens,” adds Schief.

With these promising data in hand spanning both safety and immune responses, the researchers will continue to iterate and design boosting immunogens that could eventually induce the desired bnAbs and provide protection against the virus. These findings also come shortly after two additional studies in Immunity published in September 2022, which helped validate the germline-targeting approach for vaccinating against HIV.

“Working together with IAVI, Scripps Research, the VRC, GWU, additional investigators at Fred Hutch and many others, this trial and additional analyses will help inform design of the remaining stages of a candidate HIV vaccine regimen—while also enabling others in the field to develop vaccine strategies for additional viruses,” says McElrath of Fred Hutch.

IAVI, Scripps Research, NIAID, the Bill & Melinda Gates Foundation and the U.S. President’s Emergency Plan for AIDS Relief (PEPFAR) through the United States Agency for International Development (USAID) are partnering with the biotechnology company Moderna to develop and test mRNA delivery of these HIV vaccine antigens. Two Phase I clinical trials are underway that build on IAVI G001, one (IAVI G002) at four sites in the U.S. and another (IAVI G003) at the Center for Family Health Research in Kigali, Rwanda, and The Aurum Institute in Tembisa, South Africa. Both are testing mRNA delivery of the eOD-GT8 60mer that was evaluated as recombinant protein in IAVI G001, and the U.S. trial includes a boost antigen designed by the Schief lab and delivered with Moderna mRNA technology.

A third trial (HVTN302), at ten sites in the U.S., is testing mRNA delivery of three different stabilized HIV trimers designed in the Schief laboratory that are candidates for late-stage boosters in multi-stage vaccines aiming to induce bnAbs. Using mRNA technology could significantly accelerate the pace of HIV vaccine development as it allows for faster production of clinical trial material.