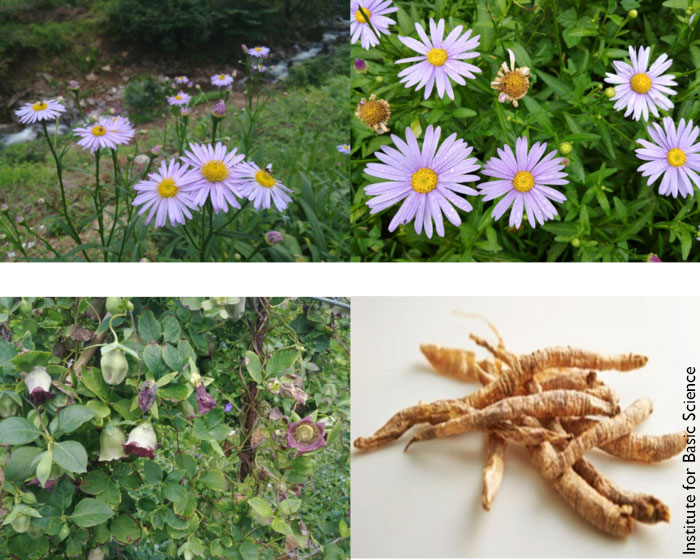 Codonopsis lanceolata, more commonly referred to as “deodeok”, is  used as a medicinal herb  in South Korea. It is cultivated in large quantities and has been an integral part of Korean cuisine across history. Aster koraiensis, or Korean starwort, is a common flower that resembles a daisy, which is only found in the Korean peninsula. What can these two different types of plants have in common?

A team of researchers led by Director C. Justin LEE from the Life Science Institute (Center for Cognition and Sociality) within the Institute for Basic Science (IBS), South Korea, recently announced the discovery of new antiviral compounds derived from these two Korean native plants. The researchers discovered that the saponins found within these plants were particularly effective at inhibiting SARS-CoV-2 infection by blocking membrane fusion, which allows the viruses to invade the host cells. These findings were published in Antiviral Research in October 2022 and Antimicrobial Agents and Chemotherapy in November 2022.

Coronaviruses are known to enter human cells via endosomes or fusion at the plasma membranes. In both of these two pathways, a process known as “membrane fusion” must occur between the coronavirus envelope and the cell membrane. The research team revealed that two saponins (astersaponin I and lansemaside A) found within the two beforementioned plants are capable of blocking this fusion of the membrane between the coronavirus and human cells, thereby effectively blocking all the ways that the virus can infect its host.

The research team first made a SARS-CoV-2 infection model using human lung cells overexpressing ACE2 receptor protein and a pseudovirus that expresses the viral spike protein on its surface, which can be used in the relatively less restrictive biosafety level 2 research facility. The cells were treated with astersaponin I and lansemaside A to test the compounds’ inhibitory effect on virus infection.

Both saponins were found to have an IC50 value (half maximal inhibitory concentration) of 2 μM, indicating that they were highly effective at stopping the coronavirus from entering the cell. The same results were confirmed in subsequent experiments using actual authentic coronaviruses, and infection was suppressed with almost the same efficiency. More importantly, the inhibitory effect was identical for all SARS-CoV-2 variants, such as the Omicron.

Astersaponin I and lansemaside A are triterpenoid saponins. They both have central ringed hydrocarbon (or core) structures very similar to that of cholesterol, which is the main component of cell membranes. in addition to a polysaccharide chain attached to one side. The central part of these saponins readily binds to the cell membrane thanks to their similarity to cholesterol. When the molecule penetrates into the cell membrane, the long sugar chain on protrudes out of the cell membrane. It is believed that this protruding sugar is what blocks the cell membrane from fusing with the coronavirus envelope.

In the past, the IBS team worked jointly with Dr. KIM Seungtaek from Korea Pasteur Institute and discovered another natural triterpenoid saponin called platycotin D from the balloon flower. This saponin was also found to be effective against SARS-CoV-2 infection. This research was published in the journal Experimental & Molecular Medicine in May 2021.

Armed with this knowledge, the IBS researchers in collaboration with Prof. HAN Sunkyu’s team from Korea Advanced Institute for Science and Technology (KAIST) explored the creation of synthetic saponins with potentially even more powerful effects. The joint team made and tested a dozen synthetic saponins possessing different polysaccharide chains with varying lengths and types of sugars. One of these saponins was found to have up to twice higher activity as that of platycodin D. This research was published in the 2022 October issue of the journal Bioorganic Chemistry.

Director C. Justin LEE stated, “Natural saponins contained in these plants are major constituents in many foods and herbal medicines that are readily accessible in everyday life. When ingested, it can be delivered at high concentrations to the epithelial cells of the upper respiratory tract, which means it can be effective in an asymptomatic or early stage of COVID-19 infection.” He added, “While their effects have been confirmed only in vitro at the moment, clinical trials may be possible in the future if positive results are obtained in animal tests.”

Senior Researcher KIM Taeyoung from the IBS said, “Historically, many important drugs such as penicillin, aspirin, or the antimalarial drug artemisinin have been derived from natural organisms. As these saponins’ mechanism of action relies on inhibiting membrane fusion, it may even be possible to develop broad-spectrum antiviral drugs based on this principle.”